Madrid, 26 October 2022. The 5th UfM Ministerial Meeting on Strengthening the Role of Women in Society was held today in Madrid. It was hosted by the Minister of Gender Equality of Spain, Irene Montero, with the presence of the European Commissioner for Equality, Helena Dalli and the UfM Secretary General, Nasser Kamel.  UfM Member States adopted a Declaration with concrete and operational recommendations, actions and measures focused on four priority areas. These include enhancing legal frameworks; improving women’s access to leadership in public life and decision-making; raising women´s participation in economic life and combatting and preventing violence against women and girls.

Some of the commitments made by the 42 countries promote the transition to formal employment for female workers; support and encourage women’s entrepreneurship; promote gender equality and inclusive models of leadership from early-age education in all fields, including in Science, Technology, Engineering and Mathematics (STEM); expand gender-responsive finance for climate and environmental action reaching women’s organizations, enterprises and cooperatives; and adopt comprehensive laws that define and criminalize all forms of violence against women and girls, including  cyberviolence.

Ministers acknowledged that gender equality in the Euro-Mediterranean region has come a long way since 2015 when they established a regional dialogue process to strengthen the role of women in the UfM countries. According to the 1st UfM Progress Report on gender equality, published in March 2022, many countries have strengthened legal frameworks and developed new programs and policies in order to increase women’s participation in political, economic, and social spheres and to protect women from all forms of discrimination and gender-based violence.

However, Ministers agreed that extra efforts are required to strengthen women’s economic and political empowerment and to put an end to violence against women and girls in the Euro-Mediterranean region, especially in light of the various crises, including those related to health, climate change, and more recently emerging needs (food, water, and energy security). Moreover, they recognised that women in rural areas have unique challenges and that special efforts are required to improve their chances and elevate their status in society.

The adoption of the Ministerial Declaration will be followed this afternoon by a High-level regional conference entitled “Women for the Mediterranean”. The Conference, which is organised by the UfM Secretariat every two years, will be held until the 27th of October in Madrid and will bring together more than 100 high-level representatives and international experts. In the midst of the current regional crises, it will offer the opportunity to share experiences, good practices, and lessons gained on women’s empowerment and rights.

The discussions will also help to shape the Roadmap to implement the countries’ mandates in the coming years, particularly in the direction of an inclusive and effective gender equality policy built on a gender transformative approach and the mobilisation of regional public and private actors. The input from experts will be crucial for advancing cooperation, putting a greater emphasis on implementation, delivery, and effective monitoring, as well as for raising awareness of the previous, ongoing, and upcoming regional efforts.

European Commissioner for Equality, Helena Dalli, stated: “We must turn crises into opportunities for change and regeneration, and remain true to our commitment to gender equality. Through the commitments agreed today, we can deliver tangible results for the future of women and girls, in all their diversity, across the Euro-Mediterranean. We must see an end to violence against women and girls, and work towards the fostering of societies where we can all be in employment, partake in decision-making, and be represented in public life.”

The Minister for Social Development of Jordan, Ayman Riad Al-Mufleh, conveyed this message: “Women make up half of society, and also gave birth to the other half. There are more and more programs aimed at improving the lives and reality of women to ensure an advanced society and a future for generations to come”.

The Minister for Gender Equality of Spain, Irene Montero, emphasized that: “We host this ministerial conference of the Union for the Mediterranean together with the European Commission and EU Commissioner for Equality, Helena Dalli, to continue promoting the advancement of women’s rights and gender equality throughout the world, even more important in times of crisis. Feminism moves the world towards a better society”.

UfM Secretary General, Nasser Kamel, said: “Gender equality is not only a fundamental human right, but also a significant marker of development and a key contribution to addressing the pressing challenges we are facing today at a global level. Inclusive societies are more prosperous societies, which is a key building block on the road towards guaranteeing the security and wellbeing of all Euro-Mediterranean citizens, regardless of their gender”. 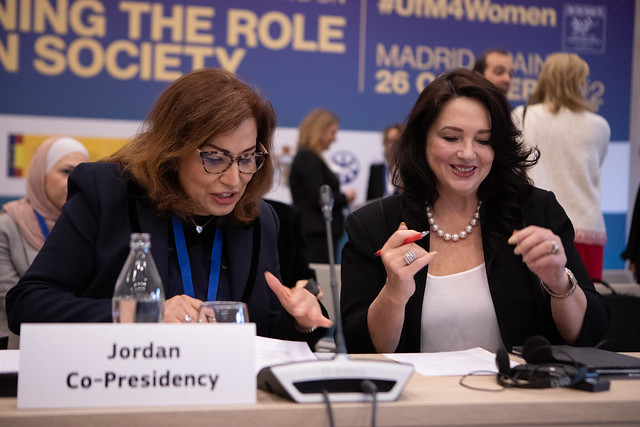